Magic, games and cardistry. These are just three ways we use playing cards. But there’s actually more to a deck than meets the eye, and it’s a mystical eye at that.

Cardology is a science that connects playing cards and astrology to guide us through life. This ancient magical method is called many names including the Cards of Life. Regardless of whether you use a custom-designed deck from Shuffled Ink or an ordinary one off the shelf, the science is present and will uncover your purpose (if you wish to divulge).

In one of our previous articles, Which Game Are You Based on Your Astrological Sign, we don’t venture into the realm of Cardology but rather relate your zodiac sign to a well-known card or board game. If you’re unfamiliar with astrology, then give it a quick read for an entertaining insight into the study.

Now, let’s explore Cardology as well as its origins, the birthday card chart and more.

Olney H. Richmond captured the true meaning of playing cards – Cardology – in his book The Mystic Test Book or the Magic of the Cards. Unfortunately, it’s not exactly easy to comprehend from start-to-finish, and there’s a clear reason why. When it was published in 1893, it was written for Order of the Magi members, a secret occult society revitalized by Richmond in the late 19th century.

A pack of playing cards is anything but standard. Each card represents our world in its entirety. Want to see for yourself? Take out any deck you can find and follow along!

4 suits = seasons in a year

These excerpts from The Mystic Test Book further describe the relationship between the four suit cards and the Earth’s seasons:

Hearts as Spring: “In the Spring of the year, the birds mate. In the springtime of life or the first quarter, love is the master passion. The heart was therefore chosen as the emblem of the first quarter and the first season.”

Clubs as Summer: “Knowledge is best gained and retained in the summer of life…therefore the shamrock, or ‘club,’ became the emblem.”

Diamonds as Fall: “The third season, autumn, has for its emblem the diamond, representative of wealth. The third period of man’s life is the one in which he is best able to gain wealth…the crops are sold and the wealth of the harvest realized.”

Spades as Winter: Winter or the fourth quarter of the Zodiac is represented by the spade or acorn. By a strange and yet natural transformation, the acorn, which represented the symbolism of the death and burial of the physical form was changed … to the spade.”

With the Cardology Birthday Chart below, you can discover a lot about your past, present and future. Based on the Cards of Life, there’s a deep connection between your birthday/astrology sign and a deck of playing cards.

Based on your birth card, each component should resemble you personally. The suit cards have personality traits of their own while also making up the Earth’s seasons. The numbers further identify your attributes and the court cards carry their own set of inner rulings about your life. For example, if your birthday is June 24, then your birth card is the 6 of clubs. To see how the cards interact with your disposition, check out this article on Cafe Astrology. 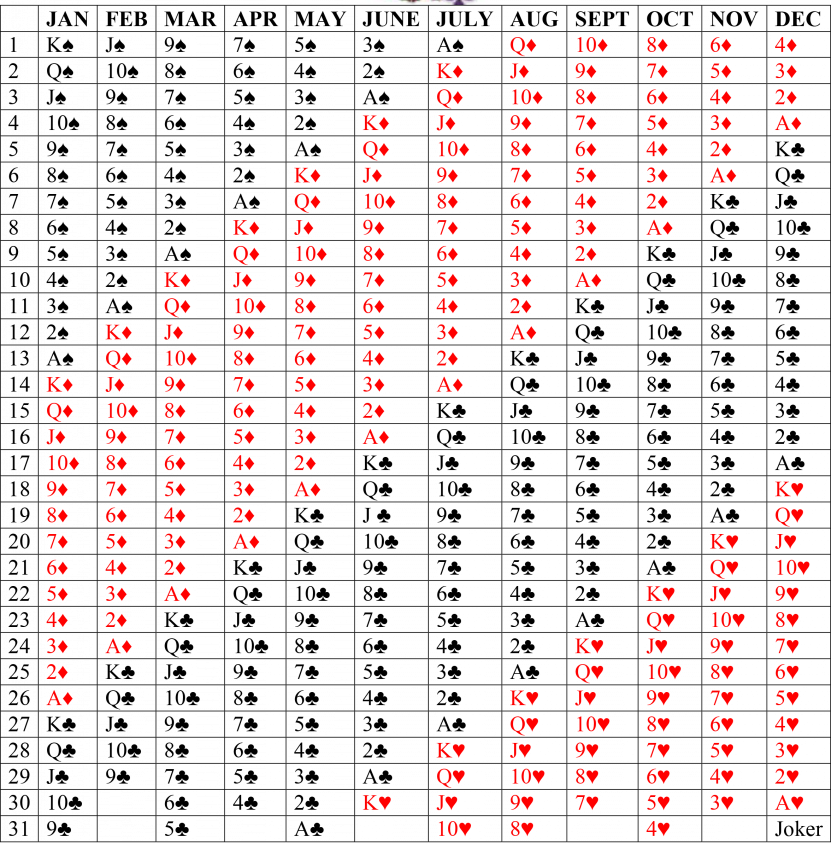 Now, it’s up to your discretion to accept the destiny shown in Cardology. In this article, we only scratched the surface on how playing cards reveal our character. There’s much more to the concept that even involves a bit of math, but we won’t dive too deep.

Let’s wrap this introduction to Cardology with a quote by Richmond:

“When we find a certain invention claimed by a large number of Nations, scattered over our globe, in widely separated locations, we must conclude that none of them were the inventors, but on the contrary, obtained the inventions of some nation proceeding them by many years.”

To receive complimentary samples of our card products, include your delivery address and phone number on your custom request a quote form.