POLITICAL PLAYING CARDS OVER THE YEARS | Shuffled Ink
Call Today Call us today407-298-3579
Political playing cards were created during the 17th century by artists who wanted to convey specific messages through art. They put well-known figures in the hot seat, bringing attention to presidential candidates, members of congress, war generals, parliament and more. These cards are fairly similar to political cartoons. Both use satire to illustrate politicians, public figures and worldly happenings. The portraits, which are still produced today, address newsworthy topics in an artistic and entertaining way. So, since 2020 is a presidential election year, now is the perfect time for a playing card history lesson. Let’s explore how these illustrations and messages have changed over the years.

In 1679, artist Francis Barlow designed playing cards to characterize Oliver Cromwell’s Government. As the head of state in the Commonwealth of England, Cromwell fought to remove the monarch from power. The 10 of clubs reveals Cromwell’s imbalance between his faith and morals. The card reads, Oliver seeking God while the K. (Don Hafelrigg K) is murdered by his order.

This infamous fact shows some perspective on the people’s perception of Cromwell — a couple of years after his death, those who supported the monarch dug up his grave, detached his head from his body and displayed it outside of Westminster Hall on top of a pole. It remained there for 28 years. 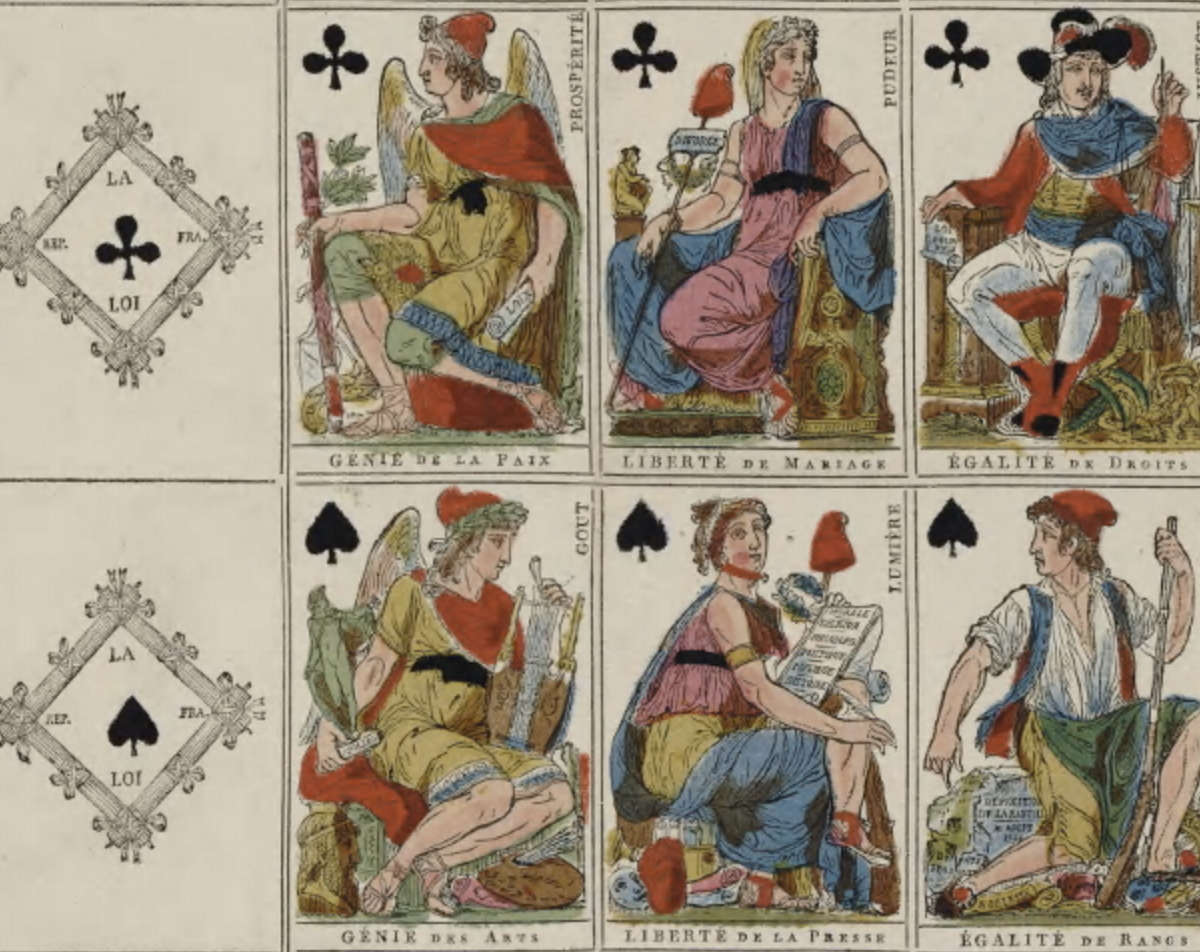 For obvious reasons, Liberal Republicans from France completely revamped their playing card deck in 1793. The rule of law, which suggests that no one is above the law, and the French Revolution, inspired the Revolutionnaire playing cards above. Since the French Revolution ultimately ended the monarchy, traditional court cards didn’t seem appropriate anymore. The Kings, Queens and Jacks were replaced by Liberty, Equality and Fraternity. This holy trinity continues to act as an important part of their national heritage. The “Liberté, Egalité, Fraternité” motto was even written into the constitution in 1958.

Including text is not a necessity on political playing cards. Most of the time, when done properly, an illustration can successfully deliver the message on its own. In 1865, artist Andrew Dougherty commemorated the switch from wooden to ironclad warships through playing cards. The King, Queen and Jack court cards display caricature-like drawings of civil war naval members. These cards show the new iron ships in action as well as soldiers yielding rifle-muskets during the Battle of the Monitor and the Merrimack in 1862.

In 1931, Russian authorities created these playing cards to push their anti-religion agenda. The Joker card directly above quickly sums up the USSR’s motives. The winged man symbolizes capitalism and the kneeling figures are the four religions. The suits depict each religion as well: Clubs for Eastern Orthodox; Hearts for Roman Catholicism; Spades for Buddhism; Diamonds for Judaism. These drawings suggest that the Russians wanted their citizens to see religion as skewed and untrustworthy. This radiates propaganda, instilling the message that all respected religious figures are not as moral as they appear. The King of Diamonds features a rabbi reading the Torah while also engrossed by money. The Queen of Clubs shows an Eastern Orthodox nun with a man in the background. This insinuates that the woman finds him desirable despite her loyalty to God. The Jack of Hearts illustrates a Roman Catholic priest wrongfully thinking lustful thoughts amid a prayer.

During WWII, Madame Lucien Willemetz designed various card games. She is well-known for creating the educational board game Le Jeu de l’histoire de la France as well as the wartime card game Atouts de la Vie. This card game emphasizes work ethic, honor, discipline, etc. Ironically, the French government did not adhere to the principles they so desperately sought to instill in their citizens. Nevertheless, the object of the game is to collect all ten virtues.

Connecting news and art through playing cards is such an innovative way to tell a story. 2020 has certainly been jam-packed with activity. So, if you’re looking to create custom cards similar to the ones above, then find a person who or an idea that is important to you and illustrate it onto any playing card product. Some of our clients, including our own company, created COVID-19 decks at the start of quarantine. These decks are informative and capture the pandemic in all its uncertainties. You think it, we print it. To receive complimentary samples of our card products, include your delivery address and phone number on the custom request a quote form. ● Official Shuffled Ink website: ShuffledInk ● Make Your Own Custom Playing Cards at: ShuffledInk ● Make Your Own Custom Card Games at: ShuffledInk