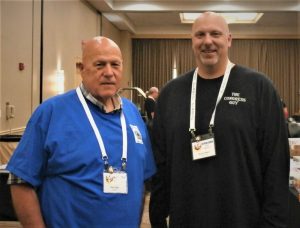 Around 2005, I started going to casinos around Indiana. While there, I would buy a deck or two from the gift shops and use them for poker, blackjack, etc.

In 2008, I started a family and friends poker club. I would always try to come up with something different and fun for everyone. Anything from pregame music, blackjack, let it ride, even a “grab bag” where I would put extra chips in a bag and let everyone take turns for extra chips. Then one day in early 2011, I decided to try to find an “old deck” of cards to use in an upcoming game.

I went on eBay and found a deck by B. P. Grimaud. When I got the deck, I opened it and was amazed that a 100+-year-old deck was in mint condition and it appeared to have never been used! Even the gold edges were 100% intact! I knew I couldn’t use these in a game so I went back to eBay and I found an interesting but well-used deck of Congress playing cards. I had never heard of that brand before, and the cards had an image of the Statue of Liberty surrounded by flags from several nations, including the US. Later I learned this deck had a name, “Liberty”, and dated from 1917. We used this deck a few times.

My dad, Dave (who is the authority on National Card Company and antique card historian in his own right) thought there could be something to these old decks. He started buying a few older decks here and there, at the same time I was slowly collecting them as well. I discovered Facebook groups for collectors sometime in 2016.

I discovered 52 Plus Joker one day in 2017 and decided to join, after my fiancée encouraged me to do so. She thought it would help me meet other collectors and help build my collection. Little did we know what was to come.

Dad and I went to our first club convention, held in Erlanger, KY that same year, albeit just for the day on Saturday, the final day of that convention. We met a few new friends there and bought some nice antique decks. Dad signed up for the club that day and our journey officially began.

At the convention in Cleveland in 2018, I had pretty much narrowed my focus to only collecting Congress decks. The artwork featured on these decks were taken from popular artwork of the day. I still collected other antique decks as well, but during this convention I wanted to buy whatever congress decks I could get my hands on. It was during this time I got my first “lacquer back” deck, dated 1885. Lacquer backs are pre-1900 decks with gold or copper colored ink for the image and solid color backs. Very desirable decks and very hard to come by.

During the auction, I had already won a few congress decks and ephemera, and while I was bidding on yet another Congress deck, I heard a woman in the audience whisper “that’s the congress guy”, presumably to the person next to her. To this day, I have no idea who this woman is. I thought to myself “that’s a cool nickname”, and went about my business.

I was already on Instagram for a short time with no real direction on how to stand out. I thought back to the nickname I heard during that auction and it just clicked. That’s how I’m going to make my mark. I changed my Instagram handle and created a Facebook page with the same name. As of today I have over 400 followers on Facebook, over 1,100 on Instagram, and I even have a YouTube channel with over 150 subscribers.