It’s game night! With tablets in hand, your family discusses which game to pick, and even your dog decides to bark his own suggestions, too.

Finally, you all agree on the classic game, Life.

Once all tablets are synced into game mode and each avatar is chosen, they move around your living room. As they investigate their surroundings, they sit on your couch, countertops and even your dog, Scout. But Scout doesn’t mind; he doesn’t even realize it. While your avatar is simply an added layer over our reality, it still shrieks at the sight of your dog…for everything in the living room can be seen, felt and heard by your avatar. Not to mention, the gaming experience feels real to you (the player), too. 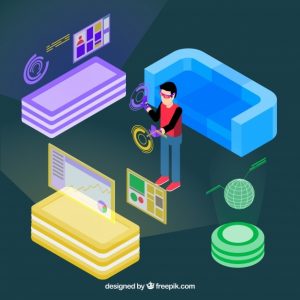 When you roll the dice, your avatar moves five spaces on the very real board game in front of you. Then, an interactive bubble with text appears in your living room and a voice says, “You got a raise. Collect $1,000.” Even a short video pops up, featuring your avatar in a series of scenarios that show how you received the raise. With that, your avatar reaches down and from the square platform it stands on, pulls out the money earned and throws it in your direction. You flinch (you always do). Your tablet lights up in celebration, and the remaining cash falls, true to size, from your own ceiling as your digital gaming bank account increases.

You are still as shocked and overwhelmed as you were the first time you played. It continues to amaze you how revolutionary this degree of augmented reality has made your board game experience.

The game, so vivid and insanely real, makes for a spellbinding game night!

Instead of manually moving game pieces with your hand from space to space; instead of just reading a card with words to describe your next task, you experience something far less trivial than “winning”. You become immersed in your very own reality; it’s just kicked up about a dozen notches.

With the world’s many technological advances, it appears we are currently living in the “future”. But when you really think about it, no matter how much a game’s outward appearance is improved or altered, the ultimate inner objective is always the same: win. Now consider this…what if the future of games didn’t even revolve around winning at all?

In the future, perhaps the driving force to play board and card games will not be to “win,” but instead the focus will shift from “competition” to “experience”.

Augmented reality means to enhance our real-world environment by using screens to display overlaying images, sounds, etc. to create an added dimension to our reality. While the essence of gaming, both the winning and the experience, will remain the same as it has been for generations, the application and evolution of card and board games is constant and dynamic. Augmented reality will certainly be a focal point of how many games are developed, consumed and enjoyed.

So no matter what dimension or reality you are looking to create and share with the world, Shuffled Ink is the perfect partner to help bring your “future” card or board game concept to life!